What future will the West
choose in the Arctic? 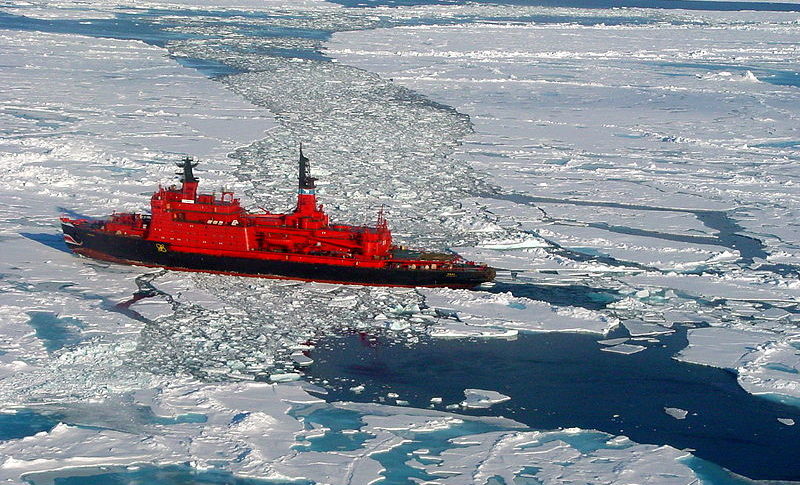 The Arctic is of strategic importance for the sovereignty of Western states. NATO and its Allies must rapidly implement a unified Arctic strategy to engage in a long term development of its capabilities. Only then will the West achieve a balance of power and be one of the major Arctic players alongside China and Russia in the 21st century.


The Arctic is of strategic importance for the sovereignty of Western states. This, combined with the political will, the deployment of military strategies, and funding capabilities of the non-Western allies China and Russia, it is urgent for the West to also develop an Arctic military strategy if it wishes to have a place in the 21st century Arctic. In this article I propose a scenario planning of four scenarios and a SWOT analysis (strengths, weaknesses, opportunities and threats) of the two most probable hypothesis. By understanding the possible evolutions in the Arctic, it should motivate the West to take action rapidly in order to work towards the most favourable future.

Most Western countries have an outdated Arctic policy and the extent of their military concern is the Coast Guard fleet to secure raw materials. They do not yet consider China as a major player in the Arctic. Whilst NATO in 2017 has considered the increasing engagement of this new actor, and focused on the Arctic when conducting the Trident Juncture exercise in 2018, this awareness must also be shared by the other countries concerned, in order to provide an answer to these long term challenges.

At the moment, China and Russia are independently deploying their military strategies but given time they could find a common ground in their Arctic deployment. I argue that the speed at which the West will – or won’t – take a military stance in the Arctic is a determining factor in the evolution of the Sino-Russian relation in the region. Currently, cooperation between Russia and China is not very high as they face cultural and historical tensions. However, this link could grow stronger especially with the development of Sino-Russian energy cooperation with projects such as Yamal LNG. It will require time for a relationship of trust to be established, for leaders to agree on the role of each other, and for cooperation agreements to be developed, signed and implemented. Thus, if the Allies do not rapidly engage in the development of a common strategy and of capabilities, Russia and China will be given time and the West may have to face strategic cooperation between these two countries in the Arctic. On the other hand, if the West takes them by surprise and reacts quickly, this Sino-Russian relation will most likely not materialize. I believe the evolutions in the Arctic will depend on two main axes: the level of the Western reaction (time frame and capabilities) and the state of the Sino-Russian relations.

Possible scenarios for the Arctic

On May 6th 2019, the US Secretary of State Mike Pompeo warned, for the first time in an official statement within the sphere of the Arctic Council, against the Chinese presence in the Arctic and against Russian aggressiveness: a real turning point for the future of the US in Arctic affairs. According to him, for the next hundred years the Arctic can no longer have the luxury of focusing on collaborative environmental issues as we enter a new era of strategic Arctic engagement that is bringing new threats to the Arctic.

The West reacts rapidly and implements an Arctic strategy

With this speech the probability of the scenario ‘Everyone for Themselves’, where the West develops a military strategy and capabilities before Russia and China have had time to form a strategic cooperation in the Arctic, seems to significantly be what the US leans towards. The SWOT analysis explores this scenario in more detail: 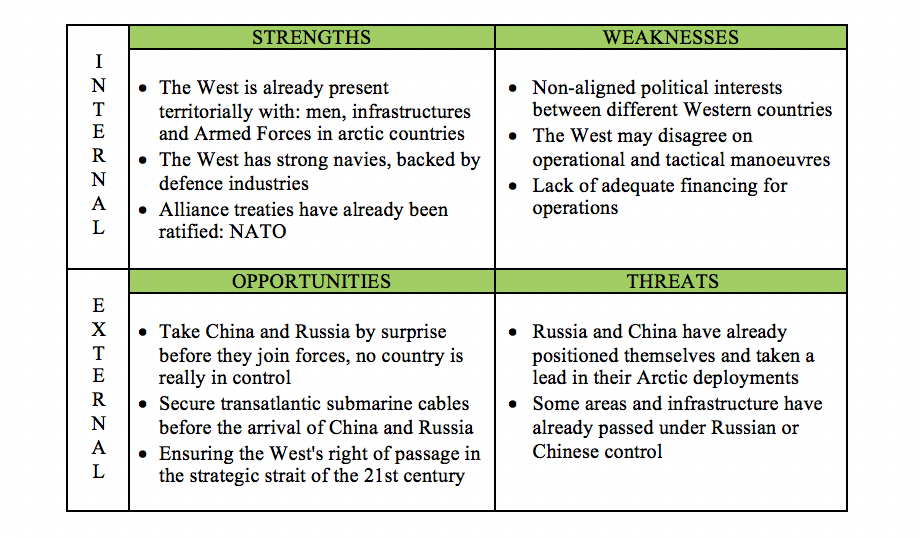 The base line for this scenario is the major historical and cultural differences which points towards a non-alliance between China and Russia in the Arctic. For Russia, the Arctic is a part of its territory. It is reasonable to assume that it will not let China, or any other country, take possession of it and will always seek to control by its own military means what it sees as its own sovereign territory. With Arctic specific equipment already operational, Russia is ahead in the regional deployment. A new element supports the assumption of tensions between the two countries if we consider the Yamal LNG joint venture. Since January 2019 it appears that PetroChina might overshadow Novatek on the European market. China uses LNG carriers to sell liquefied natural gas in Europe which is not traditionally their area of influence but that of Russia. Natural gas competition may well increase tensions between the two countries.

This scenario will only increase in probability if the West chooses to take action based on Mike Pompeo’s speech and to effectively develop a strategy and mobilise capabilities to counter China and Russia. Otherwise, in the current state of affairs, we are directed towards the Orange scenario ‘Western countries’ sovereignties in danger’: The West does not react quickly enough, giving time for a Sino-Russian cooperation.

The SWOT analysis is not done this time through the Western eye, but from the point of view of the Russia-China alliance. Indeed, the opportunities and benefits would be left to China and Russia in the event that these two powers assert their control in the Arctic. I propose an analysis of the logic in which the two countries could cooperate in order to better understand the implications that this would have for the West. 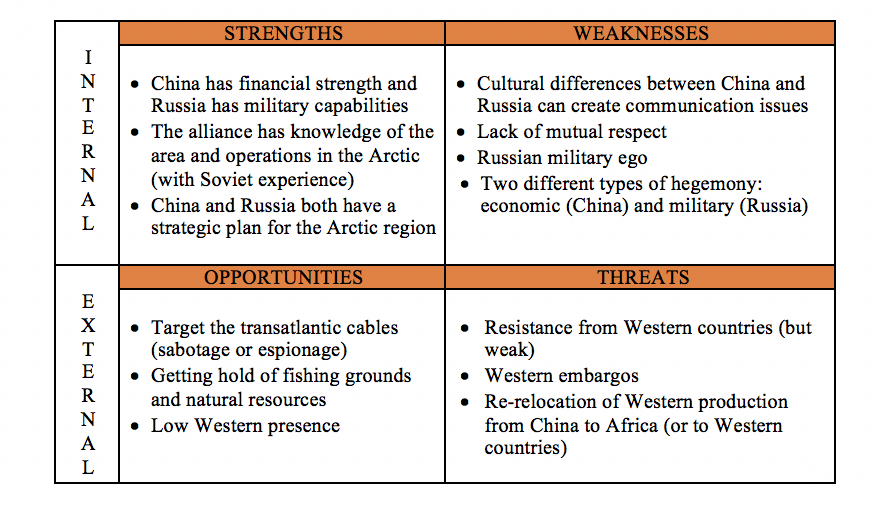 This alliance would have the effect of a steamroller on the West, putting it on the side-line for one of the major issues of the 21st century. This scenario would be harmful for the West as in this hypothesis it won’t have deployed sufficient capacities to have the opportunity to defend itself against China and Russia. Together, China and Russia have military and financial capabilities as well as knowledge of the area. Also, both have already individually acquired a strong position in the Arctic which would make a confrontation complex and devastating for the West.

To clarify the Orange scenario, take the case of China which is in the process of a slow infiltration in Arctic countries such as Greenland and Iceland. The US Secretary of State himself said: “Do we want the Arctic nations, or the indigenous communities in particular, to have the same fate as the regime of the former government of Sri Lanka or Malaysia, trapped in debt and corruption?”. It refers to the Chinese infiltration into governments, causing what is called the ‘debt trap’ defined as loans and financial investments which cannot be repaid and are to be exchanged against natural resources or the appropriation by China of strategic infrastructures. China could start by taking control of a port, then an airport, and then increase the number of coastguard vessels (which happen to be ex-053H2G frigates with remaining machine guns and military equipment) in the Arctic, and finally send the Chinese navy to secure its commercial lines of the Polar Silk Road. Chinese ships and submarines, once arrived in South Greenland, would have passed the GIUK line (the waters between Greenland, Iceland and northern parts of UK) protected by Western anti-submarine warning systems and would be within range of the transatlantic submarine cables, without any Western exclusive economic zones to cross. In the Sino-US rivalry, a temporary cut in transatlantic flows would have far-reaching impacts on the US economy, and on the West, which would take time to recover.

When it comes to the Russian threat, we could consider that Denmark’s fears concerning Nord Stream 2 are proved. The project for this new pipeline passes through the territorial waters of several Northern European countries, which requires their agreement. The other Scandinavian countries have accepted but Denmark, with its island of Bornholm, denies Russia the passage of Nord Stream 2 in its territorial waters. The Danish government, already aware of what is happening in Greenland, is opposed to the project for strategic security reasons. To ensure the functioning of the pipeline many Russian vessels are obliged to be present very regularly in sovereign territorial waters. As a result, they can legitimately come closer to Western military bases. Russian civilian equipment and ships are dual use items, like in the time of the USSR7: both civilian and military. Thus, these boats under cover of the Gazprom maintenance banner (Russian energy company) can be requisitioned at any time for military purposes.

We could even consider that in the current era of the ‘all digital’, the risk of electronic warfare is strong. A Russian presence not far from military bases could undermine the military capabilities of Western countries if they wish to deploy in the Arctic. The methods of scrambling, decoying or interception of signals are mastered by Russia as well as China. Their close proximity to strategic Western military command and operational sites significantly increases the risk for the West. This echoes the Chinese presence in Greenland, close to the American Air Force base of Thule, the main Western radar coverage of the Arctic (with the system PAVE PAWS). The scenario presented offers a perspective of a slow infiltration and strategic positioning of China and Russia which could, at any moment, bring down Western defences and undermine the very sovereignty of Western countries.

Which scenario will the West choose? If our aim is the Green scenario, action has to be taken now. The time it takes our institutions to adopt a strategy, implement it and develop the Arctic specific capabilities means that if we wait any longer, the Orange scenario will most likely impose itself upon us. This scenario planning schematically shows the disastrous consequences that a lack of military strategy, preparation and deployment in the Arctic could have on the interests of Western countries. So, to avoid a scenario where the West remains a spectator while China and Russia share the Arctic, or where the West becomes victim of a war against these two countries; NATO and its Allies must rapidly implement a unified Arctic strategy to engage in a long term development of its capabilities. Only then I argue, will the West achieve a balance of power and be one of the major Arctic players alongside China and Russia in the 21st century.

Mathilde Ytier is a former Master student at the King’s College London, and has just finished a second Master at the University of Aix-Marseille. Her latest thesis is entitled “Western militarisation: a necessity to face the challenges of the Arctic”. Read also Ytier’s previous article: China, Russia and Security Strategies in the Arctic