How Service Can Help Save America 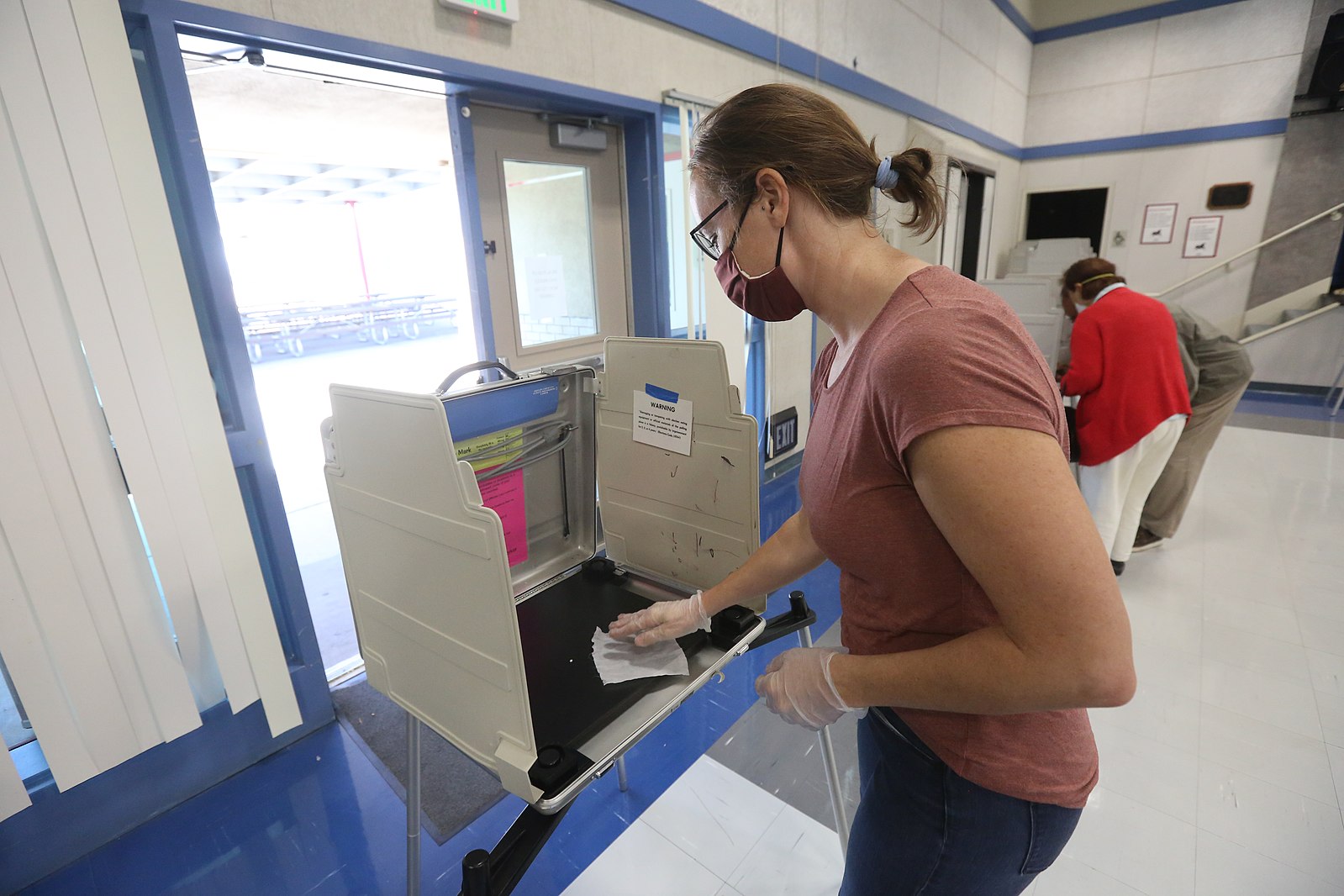 A California poll worker sanitizes a voting booth following its use at a Voter Assistance Center in Davis, CA during the 2020 General Election. Photo: Owen Yancher / Wikimedia

Last’s week election and its aftermath are confirming the breadth and depth of divisiveness in our not-so-United States, to the peril of the great experiment in self-governance the nation’s founders laid out nearly a quarter-millennium ago, and its current place in the pantheon of world powers. Over half the country is hoping a change in political leadership will help break the logjam, but if politics is so much the problem, how can it really be the solution? There must be a better way.

Besides, aren’t we placing too much power into the hands of one person, like the man on the white horse, to save us from ourselves? That smacks more authoritarian than democratic. As Time columnist David French cautioned, “Americans should not see their individual liberty or the autonomy of their churches and communities as so dependent on the identity of the President.”

But there were other things from last week’s election-count drama our sensationalist media mentioned in passing. One was how 25 more million Americans may have woken up to the realization that citizenship is not just residence, by exercising their foremost civic responsibility. “In an atmosphere of increasing negative polarization and geographic separation,” French went on, “we can no longer take our nation for granted. We must intentionally care for the state of our union.”

Another was less obvious — how tens of thousands of poll workers in thousands of communities across the fourth largest and third most populous country in the world, almost all of them volunteers, from all walks of life, Republican and Democrat inspectors side-by-side, tirelessly took tremendous care to ensure as accurate and complete a count of that record-breaking number of votes, in the midst of all this division and misinformation, in the middle of the greatest pandemic crisis in a century, and amongst the complexity of the permutations of procedural regulations in 50 separate states, a few territories, and overseas ballots to boot.

This was nothing short of miraculous. And yet this quiet act of citizen service performed at every election was an affirmation of the vitality of our democracy. As a 30-year Army veteran, writing these words on Veterans Day: Thank you, ladies and gentlemen, for your service in ensuring a country worth my own service and sacrifice.

It’s not just the election that may be showing us the way forward in an annus horribilis whose end is not yet in sight. When fear of the pandemic gripped us in the spring, love also broke out for the work of health care professionals. They and a panoply of “essential workers” to include postal and delivery workers, and even shelf-stockers and cashiers began to permeate an emerging national narrative already inhabited by the military, the police, firefighters and other first-responders. Then there were all those, formally and informally, who helped battle the worst wildfires in the West and the impacts of so many named hurricanes and storms to the east and south that we had to adopt the Greek alphabet.

“Thank you for your service” is becoming a more an acknowledgement of the inclusive responsibility of all than the exclusive burden of few — and that is good news. The value of service is democratizing as our embittered and divided society is reaching almost irreconcilable dysfunction.

The National Commission on Military, National, and Public Service defines service as “a personal commitment of time, energy, and talent to a mission that contributes to the public good by protection the Nation and its citizens, strengthening communities, or promoting the general social welfare.”

A relatively strong sense of service and volunteerism is among America’s greatest national strengths, going as far back as it contentious and divisive political culture. In its final report, issued this past March, the Commission noted: “From the earliest days of the Republic, service has been a central part of what it means to be an American — and it remains so today. Civic engagement and service are critical to the health and well-being of the Nation; by bringing people together to tackle common problems, service makes communities stronger and strengthens American democracy.”

For some time since 9/11, there’s been increasing talk of national and community service in one form or another. Popular support for it is overwhelming. Demand for service opportunities has been outstripping supply. Millennials in particular are becoming more service-oriented as well as civic-minded. Among the many virtues they and others are discovering is that service to others, which doesn’t require a uniform, brings people together. In a hyper-divided nation, this is more than good news.

In addition to the Commission is the Serve America Act as well as the late Senator John McCain’s bill to create a 21st Century Civilian Conservation Service Corps to engage young Americans and veterans in restoring national parks and other public lands. Meanwhile, former presidential couple Barack and Michelle Obama are encouraging community service through the Obama Foundation. More and more high schools and colleges include community service as a graduation requirement, reducing the stigma of community service as a form of punishment for misdemeanors.

Building from our well-developed infrastructure like AmeriCorps, the Peace Corps, and myriad public and private programs, retired General Stanley McChrystal and Service Year Alliance chair argued, “could unleash the energy of our young people to tutor and mentor students in low-performing schools; support the elderly so they age with dignity; help communities respond to disasters; assist veterans reintegrating into their hometowns; and perform a thousand different tasks of value to our country.”

Moreover, he exhorted, service learning ”teaches young Americans the habits of citizenship, and the power of working in teams to build trust is one of the most powerful ways this generation can help restore political and civic responsibility — and in the process help to heal a wounded nation.”

As my own project, The National Service Ride, emphasizes at school seminars, service-powered citizenship provides a sense of personal and collective identity not found in smart phones or social media — real, human connectivity in an increasingly alienating, narcissistic, and atomizing society. Identity being values in action, it helps develop the internal moral GPS needed to navigate a complex, dynamically interconnected, and information overloaded world. It helps people feel more empowered and hopeful, resistant to the darker narratives of exclusion and division by replacing enmity with empathy. It could even help restore faith in government by giving people something to talk about other than politics, creating space for less toxic civil dialogue.

A narrative of service to others fosters a collaborative mindset, establishing real common ground for less toxic and polarized civil dialogue on matters inexplicable in 280 characters. Besides revitalizing citizenship along the lines of thinking globally and acting locally, a more universal sense of service and sacrifice remedies an unwholesome civil-military relationship. Rather than slogans and bumper stickers, the best way to honor those who put their lives on the line for others is to walk and not just talk. Patriotism, after all, is something you do more than something you feel or say.

USA Today opinion contributor Jonathan Zimmerman is right to point out that our schools can play a big part in helping us move past partisan division, by helping our kids be better citizens and not just employees. On a more practical side, service learning is where real education begins. Citizenship starting with civic action can also enfranchise disconnected youth and marginalized groups, improving social cohesion and resilience and even reducing crime.

Community service also helps them obtain vital 21st century economic qualifications like team-playing, team-building, and team-leading, as well as interpersonal and problem-solving skills, and how to build the personal and professional networks from which most people now find vocations.

And it can lower the aggregate cost of public service delivery. The implications for a better qualified and more competitive work force, a revitalized and more stable middle class, more shared prosperity, and general societal resilience are enormous. It would no doubt help the U.S. become more competitive in an increasingly fierce global marketplace.

People need not wait for the government to come up with something, nor go very far, for there are myriad ways to become citizens as responsible to neighbors as to nation. While more hands, hearts, and minds are needed for public and national service, most Americans can best serve their country by serving their community. It is, after all, its communities — not its capital — that makes the United States the country it is. Besides, the ground-up dynamics of building peace and security that our aid specialists see working over there are the same that work over here — whether with community policing, gender equality, race and religious relations, and so on.

The blessings of liberty ultimately come through shared sense of community fostered from and not despite our diversity. This country’s founders were aware of this, going out of their way to make sure America works better from below than from above. And like charity, citizenship begins on the block.

Americans have more power to change things than they think. The sooner enough of us act upon the common-sense notion that we do better for ourselves when we do better for each other, our country will again move forward together in meaningful way. As I say in my project video: “Washington’s not going fix America; America is going to fix America.”

This blog post was first published at Medium, November 11 2020.

Christopher Holshek, Colonel, U.S. Army (Ret.), is founder of the National Service Ride project and author of Travels with Harley — Journeys in Search of Personal and National Identity. He is also a senior civil-military advisor to the NATO ResilientCivilians project.